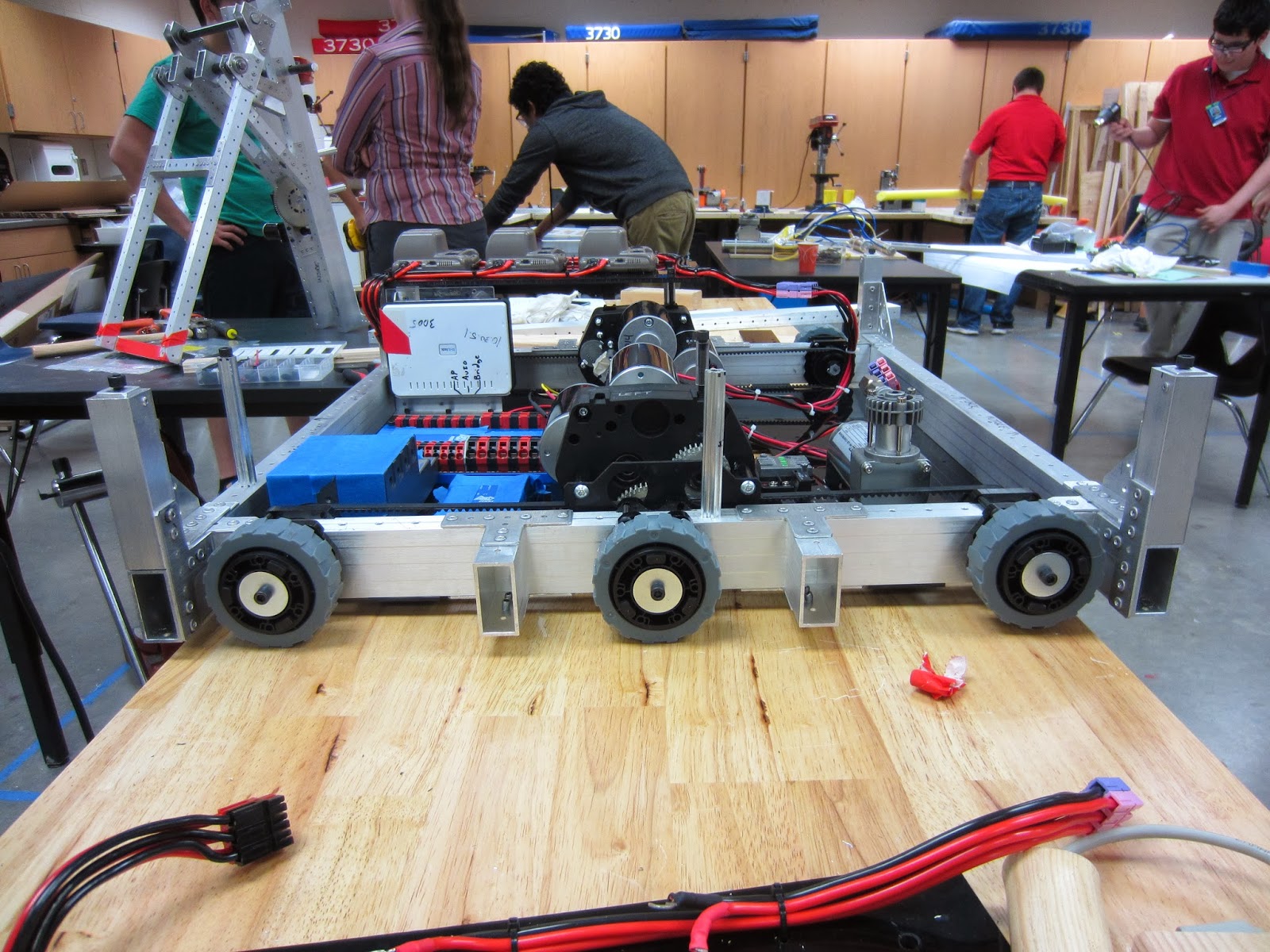 The clock is ticking and we can all feel February 18th creeping closer and closer.  There were a lot of things still to be done and not much time left to do them.  The goal set out for the week was to get the competition bot driving and begin driver training and shooter practice.  To that end, the team made the decision to go all-in and meet every day until the end of the season.

At Tuesday’s meeting we discussed the different characteristics that a strong driver would possess.  The students brainstormed a list of those qualities and learned that we would be identifying two drivers to go to competition.  We also had the opportunity to put every student through 2 test-runs on a make-shift course, allowing us an early idea of which students may be best suited for that very important role.

While the shooter and mechanical teams continued their progress we split off the students that put together our snazzy blue bumper and tasked them with repeating the process for our red bumper.  It was clear that lessons were learned the first time through and the process was much quicker and the end result even better.

Thursday saw a mini-snow storm hit the DFW area, which unfortunately meant after school activities were cancelled and there could be no progress made on the robot.  We like a snow day as much as the next guy, but not during build season!

All the hard work and long hours paid off on Friday as the mechanical team finished up the choo-choo geometry and were ready to take it through it’s initial test runs.  The first of which went off without a hitch and you could say the second went off with a bang . . . . unfortunately, the ‘bang’ was the shooting mechanism’s way of telling us that additional strengthening was needed as the force of the second shot proved too much for portions of our frame.  Of course, this is just part of the design process and we are happy to learn where the weak points are and what we need to reinforce now and not at competition.

Everyone came in bright and early on Saturday ready for a very productive, and possibly quite long, workday.  Everyone gathered for our morning meeting and we set our clear goals for the day and enjoyed some pan dulce and coffee to fuel up for the day.  Once everyone knew their tasks we headed to our build space and got right to work.

Priority number one was getting the shooter back in one piece, so the mechanical team dove right in and within a couple of hours had corrected the issue identified in our initial test fires.  While that was taking place, a couple of students spent some time on the mill and constructed some mounts for the intake mechanism arm.  This allowed us to, with the power of geometry, pin down the length and angle for our intake mechanism.

Good progress was made on the pneumatics side as we were able to construct our solenoid manifold and then attached it in it’s proper place on the competition bot.  By the end of the day we had made good progress, and although not all of our goals were met we feel we’re in a good position before the final push in week 6.  Remember to check our progress throughout the week on Facebook and Twitter!